In 1880, Belmont School was founded as a boys’ preparatory school in Blackheath, London, then moved to the village of Westcott and later, in 1957, the school moved once again to its current site.  Standing high on the hill between the villages of Holmbury St Mary and Abinger Common, Belmont is centred on Feldemore, an Arts and Craft mansion which was initially the home of Edwin Waterhouse, one of the founders of the firm of Price Waterhouse Co. in London.  The main house is set in stunning gardens and 65 acres of woodland.  Today's pupils enjoy both the formality and beauty of the house and formal gardens and the freedom of the woodland setting.

In 1877 Waterhouse bought the land at Felday, upon which Feldemore now stands and in 1878 the architect George T. Redmayne began to prepare the plans for the house, including the construction of a pond at the foot of the hill, supplying a Blake’s Hydraulic Ram to lift the water to the house.  The builders were Messrs. Wall & Hook of Stroud, Gloucestershire who had just completed the building of the church in Holmbury St Mary.

The family first occupied the building in 1880 and, at that time, the house had three storeys but only one staircase to serve the downstairs reception rooms and the nine bedrooms upstairs. The front door was hung on wrought iron hinges bearing the monograms of each member of the family – these can still be seen adorning the present front door.

Between 1881 and 1882, the stables and coachman’s house were built and a playroom was added to the main house. Six years later, new work to the house added a huge entrance hall, a new drawing room, the ante-room, library, cellar and eight further bedrooms.

At this stage three bas-reliefs were added to the new front door depicting the three Waterhouse daughters Theresa, Ellen and Valentine as “Faith, Hope and Charity”.

The extension was completed in 1890 and the front carriage drive constructed.  The motto “Ut focus sic ardet caritas” over the fireplace in the front hall seems appropriate as does the quotation from Seneca, borrowed from Mansfield College, Oxford, in the drawing room.  In the Library a further inscription is believed to have been used by Thomas a Kempis and was found inscribed under a portrait of him. It reads “In omnibus requiem quaesivi et nusquam inveni nisi in een hoeaxken met een boeaxken” and is a mixture of Latin and Old Flemish. Translated it means “In all things I have sought for peace and have not found it anywhere save in a nook with a book!”

In 1940 the army requisitioned most of Feldemore and the surrounding woodland to house a succession of units on their way to and from France. In 1941, the army took over the remainder of the building with the exception of the Library which was retained for storage of the family’s furniture.

In 1946, when the army gave up occupation, the house was rewired for mains electricity.  Mains water was laid on and Feldemore was intended to become a “Guest House”. However, at that time, the Admiralty Magnetic Station, then housed on Leith Hill, was in need of accommodation for its staff and agreed to rent Feldemore for ten years, converting it into six independent flats and a hostel on the ground floor. 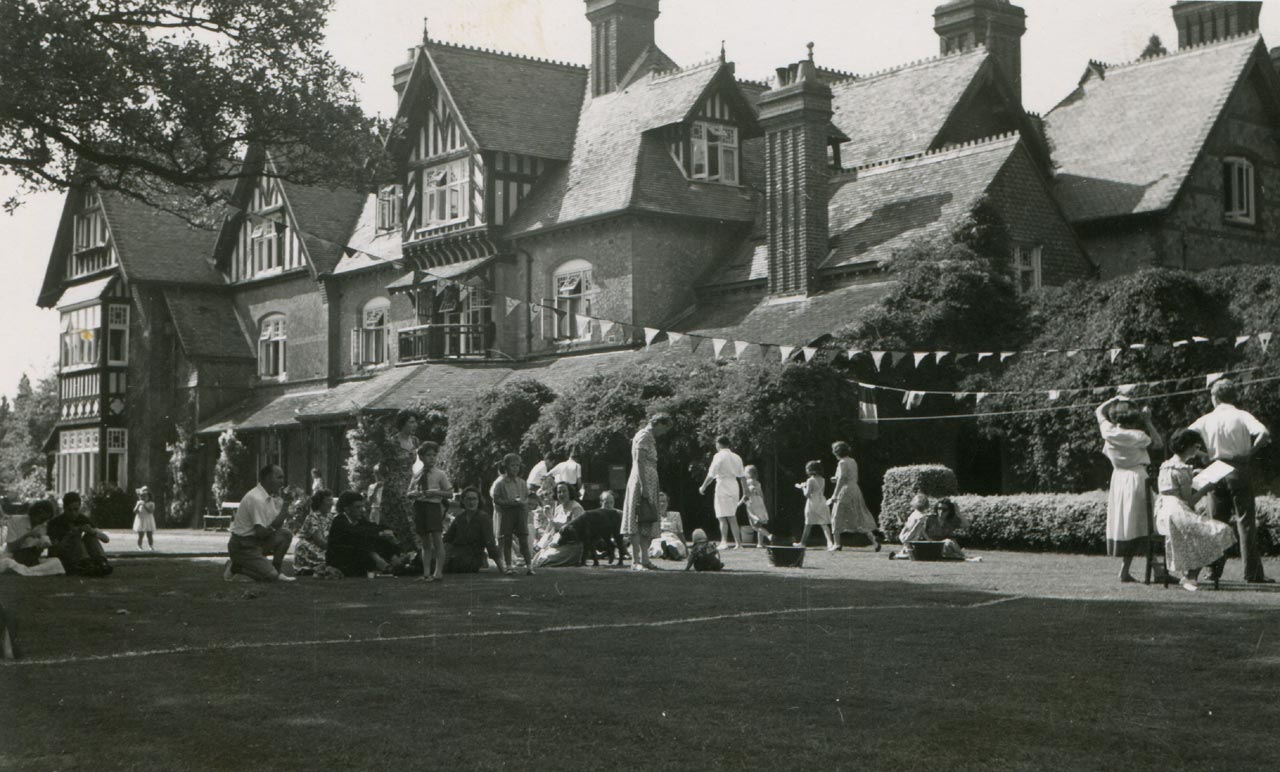 In 1955 the Magnetic Station and its personnel moved to Herstmonceux and the Admiralty sought to surrender the remainder of their lease.  At that time, Mr Frank Sharples, Headmaster of Belmont, was looking for larger premises and so the School moved from Chadhurst in Westcott to Feldemore in Holmbury St Mary – all between Sports Day and the beginning of the Michaelmas Term, 1957.

Frank and Olive Sharples performed an amazing feat when they moved the school that summer for the entire operation was achieved without the use of a single removal van!

Eventually in 1971 the lease was sold by Theodore Waterhouse to the Belmont School Educational Trust at a very generous low price.  By now, the School was growing rapidly and was in need of significant facilities which could be realised once the lease had been acquired.  Over the ensuing twenty years, facilities were established to provide the infrastructure for Belmont, which was now a boys’ boarding school.

Feldemore was almost destroyed by a catastrophic fire.  Fortunately, there was no loss of life or serious injury, and in the following year, Feldemore was lovingly rebuilt and restored, transforming it into a stunning setting for the pupils.  Since then the School has gone from strength to strength with the introduction of girls into the school, and the establishment of day and weekly boarding in place of the full boarding model.

Belmont will forever be indebted to the vision and vitality of those who sought to recreate the school, literally from its ashes, into the outstanding educational establishment that is has become today.

The School celebrated its 125th anniversary with a celebration called 125 not out.

A nursery was established for 2 - 4 year olds.  Situated near the entrance to the Belmont estate, The Mews is a self-contained, attractive setting with its own secure playground and wooded area.

A Virtual Learning Environment was established within the School, which involved the implementation of a wireless network and includes Belmont's live TV channel (MLTV).

The Theatre block was refurbished with improvements to the School dining room and the Theatre's multimedia capability.

In response to demand, Belmont was approved by the Department of Education to become a school for 3 – 16 year olds losing its former name of Belmont Preparatory School.  The School restructured its intake of pupils into three phases under the banner of Belmont School, namely the Early Years, Prep and Senior.  A significant programme of upgrading the facilities is taking place and the first cohort of Year 9 pupils started in September 2020.